São Paulo – Cooperation in agriculture, infrastructure, defense, the oil industry and food security and were some of the topics discussed during luncheon by Brazil’s president, Jair Bolsonaro, and the ambassadors of Gulf countries last Wednesday (3). The meeting took place at the residence of Kuwait’s ambassador to Brasília, Nasser Riden Almotairi, at the latter’s invitation. In attendance were Brazil’s minister of Foreign Affairs, Ernesto Araújo, and diplomats from the Gulf Cooperation Council (GCC) countries: Bahrain, Saudi Arabia, Qatar, United Arab Emirates and Oman.

“We believe there are huge investment opportunities in South American countries, especially Brazil. the Kuwaiti Fund for Arab Economic Development, the General Investment Authority and the private sector can play a key role in seizing these opportunities that will reflect positively on relations between the two countries, considering that the State of Kuwait has massive direct and non-direct investments in Brazil, and is keen on consolidating them,” the ambassador said. He also recognized Brazil’s role in global food security by meeting the needs of its trading partners even amid the pandemic. 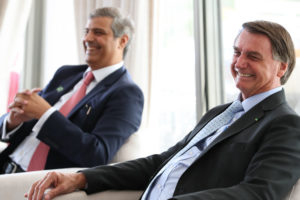 In a video on Bolsonaro’s Twitter profile, Almotairi notes that Kuwait has been investing in Brazil for over 20 years now, with investments exceeding USD 2 billion. The diplomat also told ANBA that diplomatic ties between these friendly countries date back over 50 years – a commemorative stamp was released to mark this fact. On his Facebook page, federal congressman Eduardo Bolsonaro, the president’s son, who also attended the meeting, said Bolsonaro has been invited to travel to the Arab countries and to sit down with the ambassadors again for further tanks. Both Jair and Eduardo Bolsonaro have visited the Arab countries from 2019 oin.

As per data compiled by the Arab Brazilian Chamber of Commerce (ABCC), last year saw USD 6.1 billion in goods shipped from Brazil to the Gulf countries, with meats, ores and sugar making up the bulk of sales. GCC countries’ exports to Brazil amounted to USD 3 billion, mostly of oil, oil products and fertilizers. Brazil ran a USD 3.1 billion surplus in trade with the Gulf.